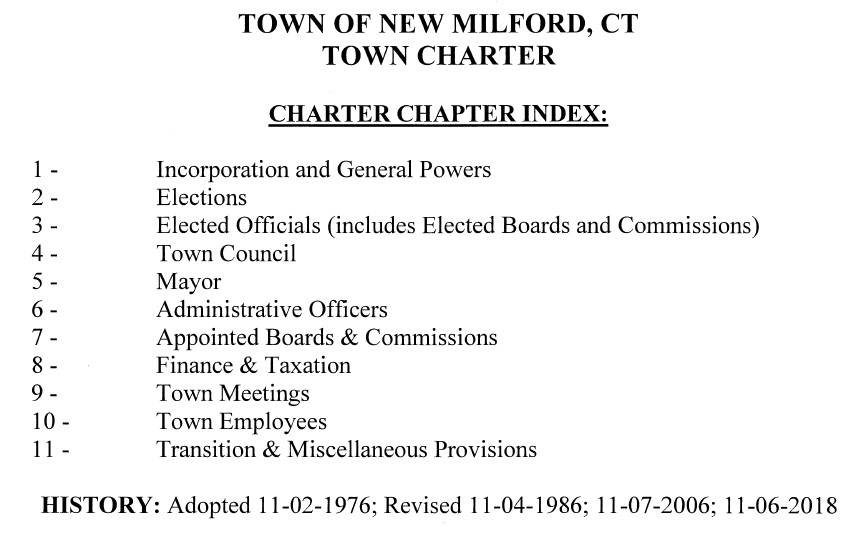 The Town of New Milford Charter, which guides all of the process and procedures we follow, had not been updated since 2006.  Many may not be aware that our Town must form a Charter Revision Commission at least once every five years.  Knowing that two previous administrations let this fundamental task slide, I properly placed this among New Milford’s highest priorities.

I formed a Charter Revision Committee which dedicated their time and talent to a complete rewrite of the Charter!  This was approved at referendum by the Town of New Milford electors in 2018.

The Commission reflected diverse perspectives and experiences, which helped ensure a smooth, thorough process.  All members love New Milford and the town meeting form of government, where the big decisions are made by you.  Realizing our structure works well, we sought ways to make it the best it could be.

After being formed, the Commission conducted research.  This started with several items referred by the Town Council.  Second, data was gathered, compared and analyzed from a variety of resources.  Third, and most important, the Commission collected input from 1) current boards, commissions, and departments and 2) citizens.  In addition to two public hearings, the Commission held public comment at all meetings and obtained feedback in writing.

The Commission had three guiding principles:

The recommended changes were unanimously approved by the Commission and subsequently by a bipartisan Town Council.

The proposed revisions make New Milford’s Charter clearer and less subject to interpretation.  The proposed changes put more checks and balances in place to preserve our current structure, but improve that structure with boldly defined responsibilities.   Finally, the changes enhance the authority of New Milford citizens, vital to helping our town succeed.

Major improvements to the Charter include:

You can download a copy of the new Charter by clicking here!