You Asked ... We Delivered! 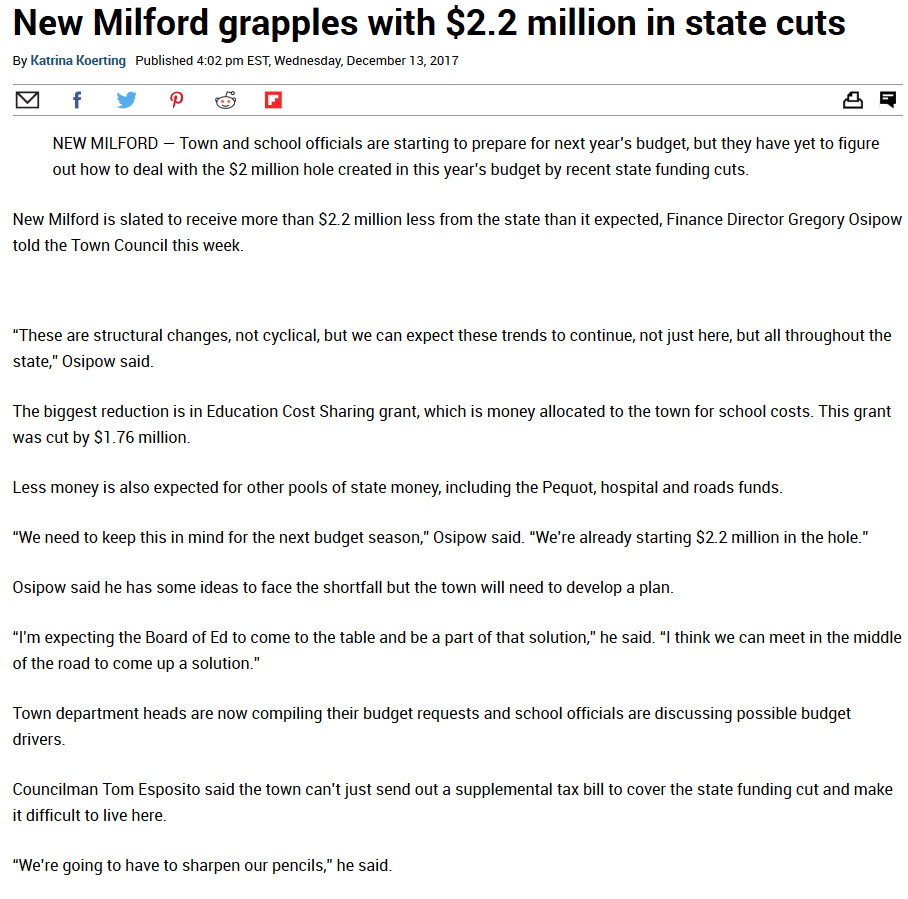 Upon taking office, I faced several several challenges regarding cuts from the State of Connecticut as well as the way our money was previously invested.

When I took office this led to a budgetary shortfall in the current year of $700,000.  This was due to the refusal of the prior Mayor to properly plan for the revenue shortfall that we knew was coming.  As a result, several layoffs were conducted.  This was in addition to several vacancies and proposed positions that were not filled as part of last years budget. To be clear, these employees were not terminated due to job performance.  They were laid off due to a lack of funding caused by this revenue shortfall that was ignored.  These decisions were not taken lightly and were some of the toughest decisions that I have ever made in my life.  They were necessary, however, to help fix our expense structure and to not push the problem off and put the entire burden on the taxpayers.

I am proud to say that through partnering with the Board of Education and fiscal restraint we were able to work through the shortfalls and end with a very minor surplus.  This included a line by line effort to reduce spending and applying business sense to government.  This was a perfect example of how time and time again, New Milford pulls together to face our challenges together.

As part of this years budget, I have conservatively and proactively estimated a reduction in revenue and taken in to account potential cuts from the State of Connecticut.

Poor Investment of Landfill Settlement Fund
Although historically the Landfill Settlement Fund had been invested in low risk funds, the former Mayor and Finance Director had decided to invest our monies in funds which as of last year were at a paper loss of $67,500.  Further, some of the funds are tied up until 2026, hurting the Towns liquidity.  These decisions were made without input from the Town Council, Board of Finance or you, the public.

Large Financial Decisions Now Made by the Taxpayer
Prior to taking office, several large financial decisions were made without input from you.  Now, we have taken all large projects such as the Library to the entire voting public through a Referendum.  Other projects such as road work are done through a Town Meeting where, you, the taxpayer have the right to not only express your concerns but also stop us from proceeding with the work if you do not believe the use of monies is not appropriate.  As your Mayor, I will continue to ensure that you are integrally involved in all major financial decisions.

Town Facilities Utilization Committee
Prior to taking office, many Town departments were moved without taking in to consideration the space needs throughout our various Town buildings to ensure that all Town space is being utilized efficiently.  In order to get a better handle on what the needs of each Department are now and in the future as well as an examination of how efficiently our spaces are currently being utilized I formed the Town Facilities and Utilization Committee.  Thanks to the hard work of Nick Pouder, Gary Hida, Wendy Faulenbach, Steve Confortini, Chris Cosgrove, Joe DeGregario and Mike Senello for all of their hard work!  Their findings include:

We have already worked on implementing several of their recommendations with more initiatives to be announced soon!  You can see their final report with all of their findings by clicking here.

Non-Profit Committee
Upon taking office, I tackled a significant weakness within our budget process ... non-profits.  Year after year, we had non-profits come to us with budget requests but they were not examined or judged in any way.  I formed a non-profit Committee so that before a non-profit was recommended to be included in the budget they would be impartially examined as to how the non-profit provided a necessary service or augmented a town provided service.  The Committee then makes their recommendations so we can ensure that taxpayer monies are spent efficiently and only if the Return on Investment makes sense.